Back to the Future: Blending a historical past with a contemporary future 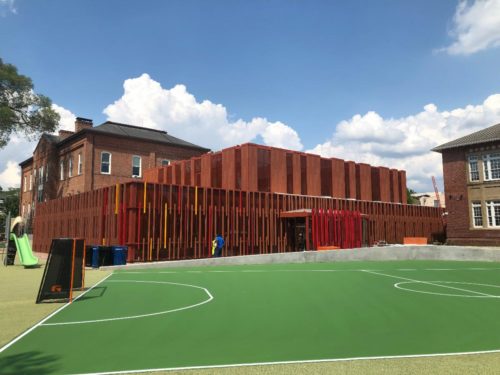 August 26, 2019, was the first day of school at Hyde-Addison Elementary. Not only was it the first day for teachers and administrators, but it was also the first day that the previously detached school buildings at this location became one campus in the Georgetown section of Washington, DC. Excited children and parents walked wide-eyed into the new courtyard of the campus, taking in the strikingly contemporary building—and its representation of over 120 years of continued education and enlightenment for young people living in the community.

What is now observed as a sleek and contemporary educational campus was once two separate, but adjacent schools on two separate streets. As the area’s academic population grew in the late 1920s, the school system combined the two buildings. The following years saw ample change: one side facing closure in 1944 for being in poor physical condition, the closed side being deemed significantly obsolete, and desegregation in the 1960s drawing more students. Throughout, the functionality of the buildings became increasingly problematic.

As a part of B&D’s ongoing partnership with DC Public Schools (DCPS) and the DC Department of General Services (DGS), both the Hyde and Addison schools underwent modernizations in recent years. The most recent phase of the project re-combined the two schools (40,000 square feet total) and added 30,000 more square feet of space to create the Hyde-Addison Elementary School. The $47M project answered the need for more capacity in the face of a growing population. B&D led architectural and programmatic studies, composed a new campus vision for Hyde-Addison Elementary School, and helped select the design-build team (Shinberg Levinas Architects and MCN Build, Inc.).

The project was all about creating more room for education. The team was able to reprogram space previously used for administrative offices and utilities / mechanical systems, turning it into classrooms (and offering upgraded accommodations for staff). The team also created a new hybrid space that will serve as a gymnasium, cafeteria, and multipurpose room. In short, a lot more space was created and found. State-of-the-art features were also installed, such as a Building Automation System to control the HVAC, and smartboards in every classroom. Finally, the project will be LEED Gold–certified!

Hyde-Addison Elementary is now poised to take on the challenges of population growth and new developments in teaching methodologies. Utilizing educational technology in a state-of-the-art building complex, Hyde-Addison is prepared to guide excited young minds into the future.

Get in touch with B&D's thought leaders