Innovation Districts: Should Your School Build One? 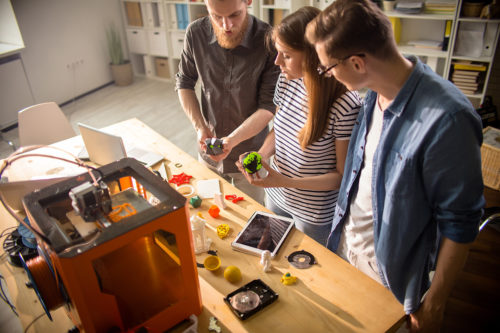 Once you visit an Innovation District, you understand their appeal. These dense communities have it all—live, work, and play. They are home to research and development, entrepreneurs, incubators, start-ups, scale-ups, and established companies. They are home to many residents. They’re walkable and transit-accessible. And they feature parks, open spaces, restaurants, retail, entertainment venues, etc. These bustling, purpose-built neighborhoods are cropping up around the country and world, generally next to a college or university.

Should your school build one? And how would you even get started?

Why do colleges and universities participate in innovation districts?

Multiple reasons. First, innovation districts spur economic growth. The concept is that, by co-locating, workers can more effectively and efficiently create and share knowledge. As colleges and universities are generally dedicated to the creation and sharing of knowledge, and to lifting people from one socio-economic class to another, these concepts are in harmony.

As an example of economic growth, we refer to a survey completed by the nonprofit Association of University Research Parks (AURP)[1]. In the 2012 survey, 108 university research parks answered a question about incubators, reporting that “963 new businesses have graduated from their incubators or related start-up space in the last five years. Of these graduate start-up companies, 26 percent remained in the park, 43 percent left the park but remained in the region and just 12 percent left the region. Significantly, only 19 percent of these startup companies were no longer in business, considerably outperforming overall national statistics on startup companies, where over 50 percent fail within five years.”

A parallel benefit to economic growth: innovation districts can create significant tax dollars for their cities. Since a rising tide raises all ships, this is good news for the schools locating in these prospering towns.

Another stat from the AURP survey, wherein 85 university research parks answered a question about employment gain, is an average employment gain of 27% during the study period, which is “a significantly better performance than the economy as a whole, which due to the global recession and weak recovery suffered a 4.5% loss of employment during the same period.”

A second reason schools participate in innovation districts is that the space in which these districts operate is itself a model of efficiency (owing to the density of innovation districts). Workers and residents of innovation districts are likely to use public transit and to be more socio-economically diverse. Colleges and universities are generally interested in having such developments on or near campus. In addition to being enjoyable places to be around, they attract high-quality students, faculty, and staff. The school is also able to communicate to the community that it supports this kind of forward-thinking ecosystem, which can help build trust in and appreciation for education centers—and even in learning/knowledge as a pursuit.

There are also myriad benefits to having such a place a nearby where both undergraduates and graduates can work—the former while earning a degree, the latter after doing so—including:

If this all sounds compelling, it probably should. Many schools are thinking the same. The 2015 working paper, “From Science Parks to Innovation Districts Research Facility Development in Legacy Cities on the Northeast Corridor,” put out by the Penn Institute for Urban Research, names 76 university-led technology parks in the US[2]. Innovation district expert Dr. Jane Talkington says there are more than 90 as of May 2019[3]. Clearly, innovation districts are drawing a lot of attention right now.

What are the challenges and risks a school faces when participating in an innovation district?

The very things that make colleges and universities such good anchor tenants in innovation districts are the same things those districts might ask schools to compromise.

Because innovation districts involve companies, there is also potential risk to doing business with businesses. How might corporate partners influence the school’s research and curriculum? What is the effect on students’ career paths as certain research topics emerge across campus while others disappear? What happens if a corporate partner shapes the district as they see fit—and then leaves? Consider, as well, that creating a new innovation district takes money. This can put a strain on institutions with limited resources.

Another challenge: Gentrification[4]. In reality, innovation districts don’t just “crop up,” but are deliberately placed—and often they are placed in, on, or near lower-income neighborhoods. As with any such development, gentrification is a risk. The good news here is that innovation districts create jobs—including jobs for workers without degrees. Schools might also consider (1) developing programs with unemployed and underemployed community members in mind, and (2) developing workforce housing for their own faculty and staff. Having these populations near campus will aid in the innovation district’s success while ensuring the benefits of and resulting from its development and operation are shared.

A final challenge: Innovation districts aren’t just physical places. They’re cultures. The organizations that take part must be dedicated to creating and sharing knowledge, and to supporting workers in that endeavor. They must work hard to create a place that people want to be, as an innovation district becomes not just a place to work, but a place where individuals’ lives unfold. So it’s not about real estate, it’s not about claiming the title of “innovation,” it’s about living that concept. That takes work, focus, and on-campus champions throughout the life of the project. Sometimes literally—which is to say, some innovation districts even have dedicated management to create culture and facilitate networking or simple interactions. Supporting and accomplishing all this can be a lot to ask.

What role does a development advisor play in pursuing an innovation district? the benefit of extensive experience. Having worked on numerous projects, advisors can speak to what others are doing—and what has gone well or poorly.

Advisors can also help find funding or federal- and state-level incentives. On a related noted, advisors can help navigate financing alternatives—what is the best deal structure for the school, who is(are) the best partner(s), and how can the partnership(s) be set up to best ensure success for decades to come? Since P3s can play a huge role in making an innovation district happen, and since many schools will try to avoid using their own balance sheet or debt capacity for these types of off-campus deals, this last point is especially important. A good development advisor will help structure a P3 deal to shield the school from the financial risk of the project.

Finally, advisors can be an impartial voice. Whoever plans and operates the project determines so much about it. You can imagine that an innovation district envisioned by a planning department would be very different than one envisioned by the provost’s office. Which is best for students? For the school? Which will succeed in the long run, and what does that success look like? An advisor can work strategically to help create something in the school’s best, long-term interest.